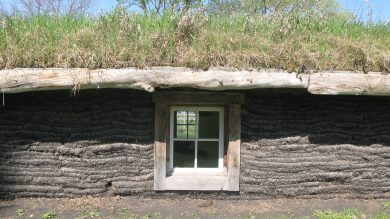 Some museums are a single building, but at the Mennonite Heritage Village (MHV) we have over 30 buildings and monuments. This year with the help of a tour handbook that former MHV Curator Roland Sawatzky put together, I want to take you on a grand tour of several of those buildings. For Mennonites in Canada these buildings are where it all began.

The first one is the Semlin, which can also be written Zemlin since the /s/ consonant in the original Russian has a /z/ sound to it. Semlin literally means ‘to be earthenized’. These Mennonites took ‘putting your roots down’ literally. We all know another Russian word Kremlin which sounds similar to Semlin, but it’s meaning is the opposite. Kremlin means ‘to be capitalized’ or ‘a fortified city’.

The humble Semlin, is a semi-subterranean sod-hut, built as a temporary measure by the early prairie settlers in preparation for the oncoming winter. It was a dwelling form used by Mennonite pioneers in Russia and Prussia before that.

In Manitoba, the Semlin was more common on the West Reserve than the East Reserve, since timber was not as easily accessible there. It was constructed by digging a pit approximately two feet deep and stacking grass sods around the outer edge to a height of about three feet above ground level. The standard size was about 15 X 35 feet, with a space of about 15 square feet reserved for livestock. A peaked roof of poplar logs or split oak was then laid and plastered with clay or mud and covered with a layer of overlapping sods. Inside walls were either filled with clay or finished with boards; the floor was also either earthen or of wooden planks. Windows, if there were any, were brought from Winnipeg or the nearest trading center by oxcart.

Semlins were prone to flooding in spring, but if we were living in one this spring I think we would have no issues. Semlins are also not suitable for hosting company, so 2021 is actually a great year to live a Semlin! Before John C Reimer helped establish the Mennonite Heritage Village in 1964, he had his students in Blumenort build a Semlin with him. Let me know if you ever decide to build a Semlin in your yard. It would be a great project to be a part of.

Some families lived in the sod-hut only until the following spring, when a more permanent dwelling, such as a log house, could be constructed. Others had no choice but to remain in the Semlin for up to six years. The length of inhabitation depended on such factors as, availability of building materials, financial status of the settler, and the season of arrival in Manitoba. Semlins also occasionally served as the first schoolhouse in a settlement. Come visit our Semlin this year and get rooted!

This website uses cookies to improve your experience while you navigate through the website. Out of these, the cookies that are categorized as necessary are stored on your browser as they are essential for the working of basic functionalities of the website. We also use third-party cookies that help us analyze and understand how you use this website. These cookies will be stored in your browser only with your consent. You also have the option to opt-out of these cookies. But opting out of some of these cookies may affect your browsing experience.
Necessary Always Enabled
Necessary cookies are absolutely essential for the website to function properly. This category only includes cookies that ensures basic functionalities and security features of the website. These cookies do not store any personal information.
Non-necessary
Any cookies that may not be particularly necessary for the website to function and is used specifically to collect user personal data via analytics, ads, other embedded contents are termed as non-necessary cookies. It is mandatory to procure user consent prior to running these cookies on your website.
SAVE & ACCEPT